It was cold and dark. Wind howling, rain lashing against the window panes. The kind of night you dread going out into. I tell you, couch + woolly socks + hot water bottle have never seemed more appealing.

I took courage from the fact that I was leaving some of life's subtler pleasures behind for a good cause – and I'm so glad I did because it turned out to be a great night!

It was a special knitting event hosted by Save the Children at the Living & Giving Shop in Primrose Hill, starring none other than the yarn legend Debbie Bliss, who despite the lofty heights of knit guru status is still proud to call herself a Walthamstow lass! You rock Debs:

The event was also attended by Trisha Malcolm, Editor in Chief of Vogue Knitting, plus a select few of us hardcore knitter bloggers armed with our 3.75mm needles: our task? To knit mini woolly jumpers to help promote Christmas Jumper Day on December 14th, which is a quirky campaign to raise money for underprivileged children around the world. The idea is to wear your goofiest, daggiest, naffest, most Colin Firth-esque festive jumper and donate £1 to take part. Genius!

As we arrived we were each given a glass of booze and a gift bag with three balls of luscious and festive Debbie Bliss yarn plus a pattern to follow.

I was lucky enough to be sat at the food table with four lovely ladies: Rose, the owner of yarn-haven 'Nest' in Crouch End, whose dry wit kept us amused all night; her hilarious friend Karen, who detests
weaving ends and whose accent is the poshest of any non-native speaker I've ever heard (she is Cuban-German!); Claire, a lovely textiles teacher with a flaming shock of beautiful red hair; and gorgeously demure Shoreditch Sister Jen, the unlikely advocate for vulva patchwork quilts against FGM. A motley bunch, yes. United through knitting! What could be better?

I'm new to the technique of Intarsia, which is knitting with multiple colours, so I'm thankful to have had Rose on hand to help me out.

But with a bit of practice (unravelling the whole thing and starting again) and determination I finally nailed that bloomin' snowflake. Sort of. 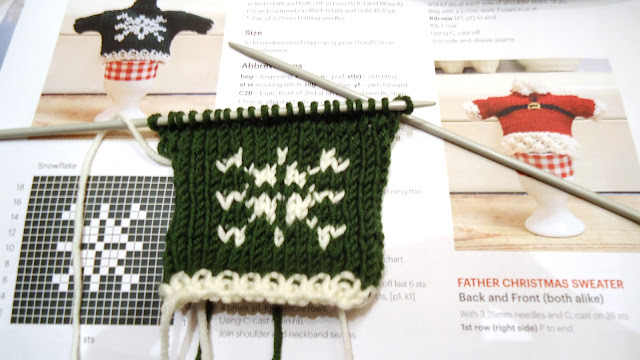 At this point I surrendered the needles because it was becoming increasingly hard to juggle them with wine, quiche and finger sarnies. The three hours went by in a blur which is alway a good sign for fun times.

Big thanks to Kathleen from Save the Children for organising, to the celebs for dedicating their time to a good cause, to the shop staff for being so welcoming, friendly and accommodating, to Magda the cool
photographer and to the rest of the Knitterati crew for their incredible skills and general awesomeness.

Here are a few more pics from the event: